The Mass Confusion of Super Mario 2

There is a plague of confusion that surrounds Super Mario Bros. 2, which I am going to attempt to clear up once and for all.

The game the non-Japanese world knows as Super Mario Bros. 2 is actually a sprite swapped version of a Famicom Disk System game called Yume Kōjō: Doki Doki Panic. Doki was created and directed by Kensuke Tanabe at Nintendo, and was originally envisioned as a two-player co-op game. The game remained an unfinished prototype, that is until Nintendo was approached by Fuji Television to create a promotional game featuring the station’s mascots. The unfinished prototype was slightly redesigned, dropping the co-operative elements in favour of a more straight forward platforming experience and released for the Famicom Disk System in 1987.

This extreme difficulty scared Nintendo of America away from localizing it to cartridge for play on the Nintendo Entertainment System. Instead, they chose to retool Doki Doki Panic, who’s licensing rights did not extend outside of Japan, by simply switching out the Fuji Television mascots with Mario sprites. This game was then released as Super Mario Bros. 2 outside of Japan, and became a massive blockbuster.

In a strange twist of fate, the success rampant success of the North American Mario 2 resulted in Nintendo bringing the game back to Japan, this time in cartridge form for the Famicom, with the Mario sprites intact. This game was released in 1992 as Super Mario USA. 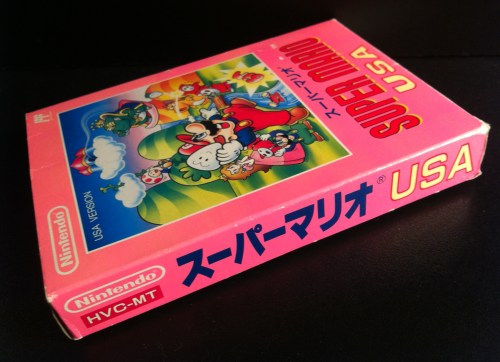 Super Mario Bros.2 / Doki Doki Panic has become a polarizing entry in the Mario pantheon. Some feel that the game strays too far from the Mario formula- and this is certainly true! Given the nature of the games history, it is perfectly valid to call this game the black sheep in the Mario franchise. However, many of the ideas and iconography introduced in Doki Doki Panic have long since become series staples; most notably Shy Guys and Birdos, to name a few. Love it or hate it, when viewed from the prospective of the games somewhat nefarious history, Super Mario Bros.2 / Doki Doki Panic stands as a treasure trove of interesting ideas and mechanics, regardless of their ultimate success.

Nathan is a videogame enthusiast, freelance writer, bush league taco critic and Chrono Trigger aficionado. He loves the Super Nintendo and Japanese Role Playing games. Hail Satan. Check out his dark, absurdist comedy troupe Art on Fire on Funny or Die or creep his video game blog at VideoGamesAreRad(dot)com and

Speedpainting – Out of this World / Another World