I first heard about Owlboy in the summer of 2017. I was studying abroad in China with some friends, and my roommate at the time picked the game up on Steam. I had heard a little bit about it, and it generally looked interesting from what I’d seen him play of it, but I never felt entirely compelled to pick it up for myself.

When I decided to try the game, my expectations were generally low. I had just finished the Mario + Rabbids Kingdom Battle Donkey Kong Adventure DLC, and I needed a new action game to play in the 5 days between when I finished DK, and the release of Pato Box for Nintendo Switch, another indie I was looking forward to picking up. In doing some research, I learned that Owlboy was only about 10 hours long, and that the game was released physically for Nintendo Switch, so all things considered, it seemed like a good play in the small time frame I had allotted for it.

The back of the box refers to Owlboy as “an award winning, story driven platformer,” and from what I had seen of the gameplay, it appeared there was also quite a bit of flying involved. The gameplay mostly involves flying through open areas, towns and dungeons, solving puzzles, fighting bosses, and a few other miscellaneous tasks here and there. Flight, the main feature of the game, generally feels good and the game is designed well around it.

While I enjoyed the movement, the combat isn’t quite as compelling. Throughout the adventure, you’ll recruit three friends/party members that Otus, the game’s main character can carry around. Each party member has a different ability that helps in dungeon exploration and combatting enemies. This sounds nice in theory, but outside of the partner characters and a few optional health/weapon upgrades, that’s about it for upgrades to your arsenal. Because of this, I never felt like I got any stronger or powerful over the course of the adventure.

This may have been as designed, as story tends to frame Otus as a weak, unlikely hero who seems to persevere despite the odds being stacked against him. While I’ll applaud the consistency here, it ended up making the game feel a bit dull toward the end. If I could have learned a few new abilities or gotten a few new weapons throughout the adventure, I think it would have felt a bit more varied and fresh as time went along.

Rather than new weapons, Otus uses his friends as a means of combat

Story is a clear focus here, and for what it’s worth, it’s alright. I should note that I generally don’t care much about story in games, so take my critique here with a grain of salt. The characters are generally interesting and well written, but the course of the plot throughout the game seems a bit scattered. While it’s clear why I’m going from place to place, getting there seemed like not much more than a convoluted set of hallways.

One other gripe I had with the story comes toward the end. Without spoiling anything, I’ll just say that the story itself gets a bit caught up in trying to explain some vague “higher meaning,” rather than tying together a clean and clear ending based on the characters themselves. I suppose it’s nice if you’re up for a bit of philosophical pondering or whatever, but I would have preferred something a bit more straightforward and character driven.

Visuals and music are a standout. The game used pixel based graphics in a more detailed way than I’m used to, and it definitely pays off. Character emotions are very clear, both in facial expressions and larger movements. Backgrounds set pieces are also all very nice to look at. I did generally enjoy progressing and seeing what new visual environments the game would have to offer. The music isn’t “catchy” per say, but it’s not trying to be. It does a good job of being both atmospheric and epic in a way that fits the style of the game. 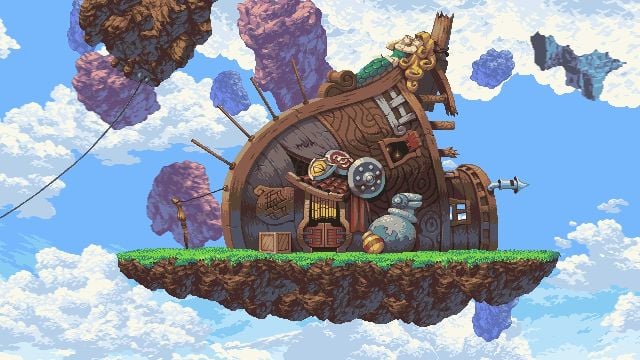 Detailed set-pieces like this one set the game’s visuals apart from the rest.

All in all, if you like puzzle platformers, and you’re generally one for storytelling in games, Owlboy is definitely for you. If you’re looking for deep gameplay, a bit of action, or lots of customization options, you’re best looking elsewhere. If you’re willing to give the game a shot regardless, the 10 hours you’ll spend playing through Owlboy are filled with enjoyable characters, beautiful landscapes, and a soundtrack that sets a fitting mood, along with gameplay that is unique in some aspects, albeit a bit shallow in others.

Born in March of 1997, Cyrus Burris is a Game Production Management student at Champlain College in Burlington, VT. Since his earliest memories of games like Super Mario 64 and Paper Mario, Cyrus' love for video games and all things geek has grown exponentially. With 3 and a half years of employment at Retro Games Plus under his belt, his appreciation for video games spans far beyond his own lifespan, finding true excitement in every generation of video game consoles.